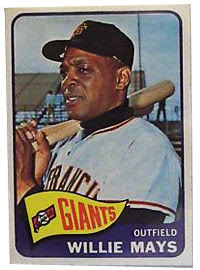 1900 - At the Polo Grounds, Christy Mathewson makes his first start, pitching a complete game loss to the Colts. Chicago wins, 6-5, scoring four runs in the first, thanks to an error by 1B Jack Doyle.

1936 - The Cardinals and Giants split a doubleheader at the Polo Grounds before 64,417, the largest crowd in the 60-year history of the NL.

1965 - At the Astrodome facing Don Nottebart, Giant outfielder Willie Mays becomes the fifth player in major league history to hit 500 career home runs. The 'Say Hey Kid' will hit a league-leading and career-high 52 home runs en route to his second MVP season. Juan Marichal gets his 22nd victory, a 5-1 decision over Houston. It is the 11th straight win for San Francisco, which now has a 2 1/2 game lead in the NL pennant race.

1973 - During an 8-6 win over the Padres, the Giants' Tito Fuentes ties a major-league record by being hit by pitches three times.