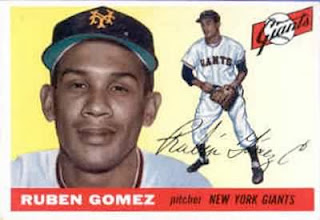 1953 - With Giants manager Leo Durocher was yelling "stick it in his ear", Rubén Gómez hits Carl Furillo, the National League's leading hitter, on the wrist by a pitch. After taking first base, the Dodgers right fielder bolts into the opposing dugout to choke 'Leo the Lip', but in the melee, the knuckle on his little finger is fractured putting an end to his season.

2001 - Barry Bonds of the San Francisco Giants became the fifth player in ML history to hit 60 home runs in a season during a game against Arizona. He joined Babe Ruth, Roger Maris, Mark McGwire and Sammy Sosa. Bonds, who is the oldest to join this elite group, reaches the historic plateau the quickest needing only 141 games to reach the milestone.
Posted by Matt Runyon at 8:43 AM