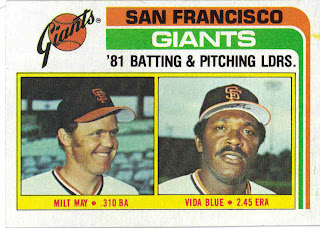 After three rough years, the Giants had a very nice year in 1982 and almost managed to steal the NL West title. On September 1 they were 9 games out of first place. The Giants went 20-7 in September and got to within 1 game of the lead on September 26. They finished 2 games behind but it was an exciting last couple of weeks. The most memorable moment for me was the final weekend of the 1982 season. The Braves, Giants, and Dodgers were all within two games of each other. The Dodgers knocked the Giants out of contention on Saturday. The Giants returned the favor on the last day of the season when Joe Morgan hit the game-winning home run to knock the Dodgers out.

The time between the departure of Willie Mays and the Roger Craig "Humm-baby" years was a tough time to be a Giants fan. The 1978 and 1982 seasons were the only rays of sunshine during that era.

The Giants managed to win 87 games despite not having many guys even in the top ten in statistical categories. As seen below, the Giants were fair at best in most of the team statistics. One thing that helped the Giants in '82 was their patience at the plate. They were first in the NL in walks and second in on base percentage. 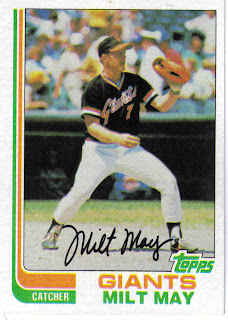 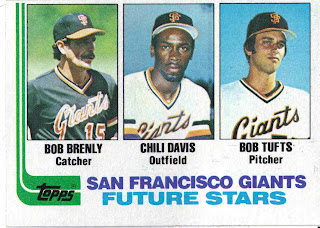