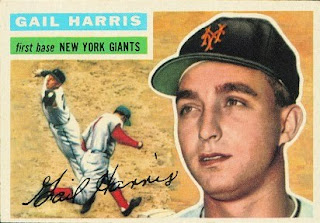 It's odd playing two teams that are so similar. It's easy to confuse the two teams.

Game 1: 1954 Dusty Rhodes homered to left in the bottom of the 4th inning. Gail Harris answered with a solo shot in the top of the 5th to tie the score. 1954 Willie Mays homered into the left field upper deck in the bottom of the 6th. In the top of the 9th 1955 Willie Mays tripled to left. Don Mueller walked, Harris grounded into a fielder's choice, then pinch hitter Bobby Hofman tripled to score Mueller and Harris. Windy McCall pitched scoreless ball in the 8th and 9th innings to earn the win. 1955 3, 1954 2. 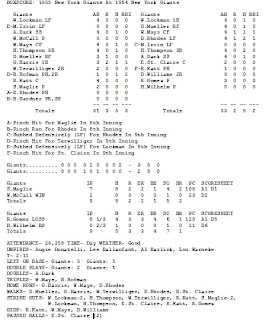 Game 2: 1955 Whitey Lockman led off the game with a double. After advancing to third on a ground ball he scored on a Willie Mays sacrifice fly. 1954 Hank Thompson hit a solo homer in the bottom of the 4th inning to tie the game. In the top of the 5th 1955 Willie Mays singled, 1955 Hank Thompson homered, 1955 Don Mueller then singled and eventually came around to score on a Ray Katt single. A 1955 Mays homer in the top of the 7th completed the scoring. John Antonelli went the distance to earn the win for the 1955 club. 1955 5, 1954 1. 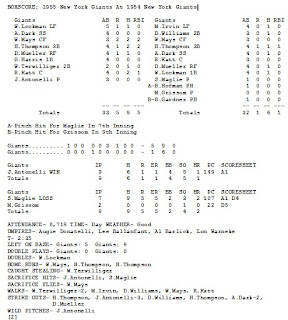 Game 3: Jim Hearn started against himself in this one. The wind was blowing out at the Polo Grounds as six home runs (three by each team) were hit in this game. The 1954 Giants were leading 5-3 in the bottom of the 8th when Gail Harris came up as a pinch hitter and tied the game with a 2-run homer. In the top of the 9th Willie Mays, Dusty Rhodes, and Alvin Dark all homered off of 1955 Hoyt Wilhelm to take an 8-5 lead. The 1955 club wouldn't go down quietly as Bobby Hofman homered, Monte Irvin reached on an error, and Willie Mays tripled him in. Hank Thompson grounded out to second base to end the game. 1954 8, 1955 7. 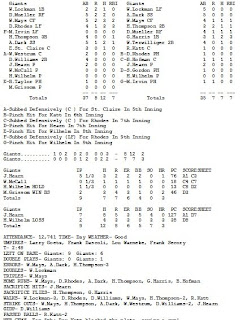 Game 4: 1954 John Antonelli allowed one run on four hits to earn the complete-game victory. 1954 Dusty Rhodes hit a 2-run home run in the top of the first inning. In the bottom of the first Alvin Dark singled and eventually scored on a Don Mueller single. 1954 Willie Mays homered in the top of the third inning and that was it for the scoring. 1954 3, 1955 1. 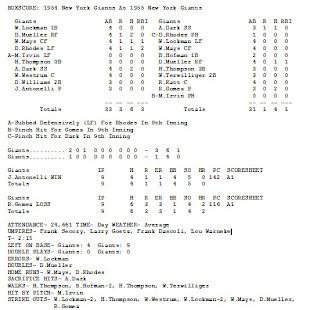 Game 5: 1954 Marv Grissom wore the goat's horns in this game. The 1954 Giants had a 6-3 lead with two out in the bottom of the 9th when pinch hitter Sid Gordon walked. Bobby Hofman came in to pinch hit and homered off of Hoyt Wilhelm to make the score 6-5. Grissom came in and walked Monte Irvin, Whitey Lockman, and Wes Westrum. Willie Mays singled to score Irvin, then Hank Thompson walked to force in the winning run. 1955 7, 1954 6. 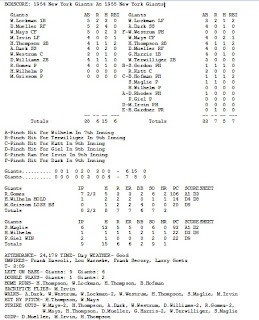 Game 6: Gail Harris was the big star in this game and Marv Grissom took another loss. 1954 Willie Mays hit a 2-run homer in the bottom of the third innings. It looked like those two runs would stand up as Sal Maglie pitched shutout ball through seven innings. In the top of the 8th inning Maglie was tiring and allowed one run to cross the plate, making the score 2-1. Hoyt Wilhelm came in to shut down the rally. Wilhelm was removed for a pinch hitter in the bottom of the 8th but the 1954 Giants didn't score. In the top of the 9th Grissom was called upon to get the save. After getting one out Grissom walked Willie Mays and Hank Thompson singled. Don Mueller hit into a fielder's choice (Mays was out at home) and then Harris, who was already 3 for 4 with two doubles, hit a triple which scored Thompson and Mueller. The 1954 Giants went down quietly in the bottom of the 9th. 1955 3, 1954 2. 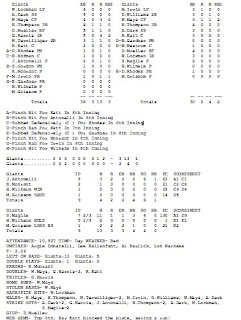 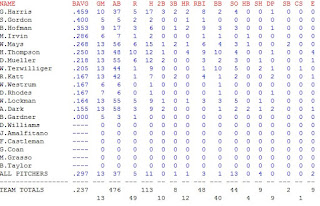 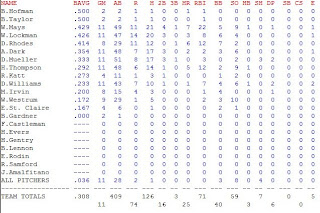 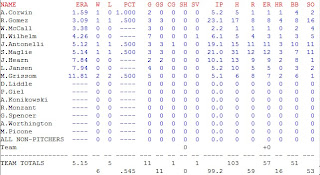 Any major injuries yet in your tournament? That aspect of Strat has caught my eye. Great idea BTW.

I left injuries turned off in this tournament, but it would be interesting to see what would happen if they were turned on.