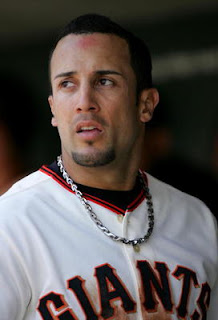 The 2009 Giants visit the 1967 Giants in Candlestick Park to start the tournament. Matt Cain is starting for the 2009 Giants and he is opposed by Mike McCormick.

Bottom of 1st: With one out Tom Haller singled to right. After Willie Mays struck out, Willie McCovey hit a double to deep center and Haller scored. Jim Hart flied out to end the inning. 2009 0, 1967 1.

Top of 4th: Freddie Sanchez led off the inning with a single to center. Pablo Sandoval popped out and Benji Molina walked to put runners on first and second. Garko singled to left but Sanchez was thrown out trying to score by Jesus Alou. Randy Winn popped out to end the inning. 2009 0, 1967 1.

Top of 5th: Andreas Torres singled to lead off the inning and stole second. After Edgar Renteria and Cain struck out Aaron Rowand hit a single to right and Torres scored. 2009 1, 1967 1.

Top of 9th: After an out was made Randy Winn hit a triple to deep center. Torres knocked Winn in with a single. Renteria singled to left and advanced to second on the throw to third (Torres was safe). Pinch hitter Eduardo Velez was intentionally walked to load the bases. Rowand hit a sacrifice fly to right. Burriss grounded out, ending the inning. 2009 3, 1967 1.

Bottom of 9th: Brian Wilson set down Mays, McCovey, and Hart in order to earn the save. Matt Cain allowed one run on three hits and got the win. Cain is now 5-0 in the tournament. Mike McCormick took the loss and is 3-2 in six starts in the tournament. 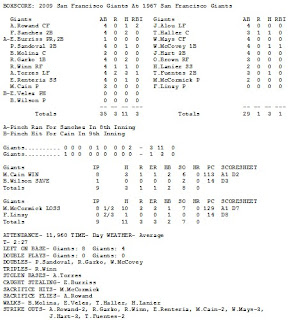