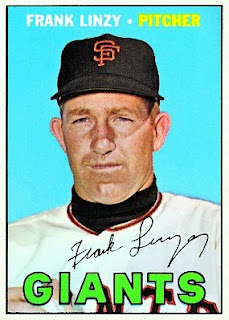 Ray Sadecki starts for the 1967 Giants. He is opposed by Brad Penny for the 2009 Giants.

Top of 5th: Jesus led off the inning with a double to right. Mays singled to right to knock in Alou and advanced to second on the throw home. McCovey singled to send Mays to third but Jim Hart hit into a double play to end the inning. 1967 3, 2009 4.

Top of 9th: Fuentes doubled and scored on pinch hitter Jim Davenport's single. Alou singled to left to put runners on first and second with one out. Haller grounded out and Mays walked to load the bases with two out for McCovey. Brian Wilson hit McCovey with a pitch to force in the tying run. Hart grounded out to end the inning. 1967 5, 2009 5.

Reliever Frank Linzy was able to get the 1967 team out in the bottom of the 10th to finish the game. The 2009 Giants now lead the series 2 games to 1. 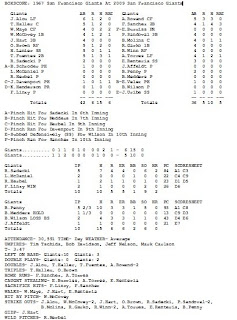 Yeah--I had wondered about that too (it's the default lineup). I looked at the 1967 boxscores on baseball-reference.com and found that Haller was often used in the #2 spot.