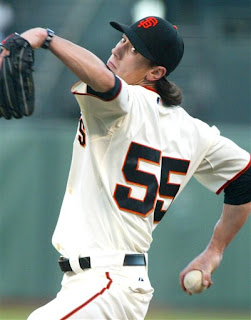 Gaylord Perry starts for the 1967 Giants and is opposed by Tim Lincecum.

Bottom of 8th: The game was scoreless until the bottom of the 8th inning and to this point Perry had allowed only one hit. Fred Lewis walked and advanced to second on a ground out by Travis Ishikawa. Aaron Rowand hit an infield single and Lewis scored on a throwing error by Tito Fuentes. Lincecum reached on another error by Fuentes to put runners on first and third with two out. Randy Winn singled to score Rowand. Lincecum then scored on a single by Freddie Sanchez. Pablo Sandoval then singled to score Winn. Benji Molina walked to load the bases and then Sanchez scored when Willie McCovey  made the third error of the inning. 1967 0, 2009 5.

Lincecum allowed four hits, no walks, and struck out thirteen batters on his way to the shutout win. Lincecum is now 5-0 with a 1.23 ERA in six starts. Perry took the loss by allowing five runs (all unearned). The 2009 Giants now lead the series. 3 games to 1. 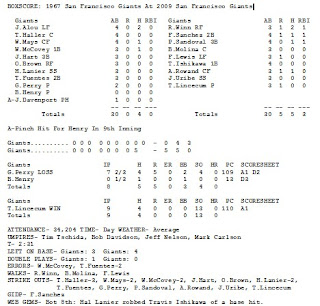