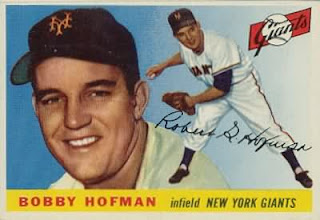 Bottom of 7th: Ray Katt singled. John Antonelli beat out a sacrifice bunt attempt to put runners on 1st and 2nd. Dark moved the runners over with a sacrifice. Willie Mays was intentionally walked and Hofman doubled to clear the bases. 1955 5, 2009 2

Top of 9th: Benji Molina led off the inning with a homer to left. With two out Torres tripled. Pinch hitter Nate Schierholz tripled to score Torres. Reliever Marv Grissom got Juan uribe to fly out to end the game. 1955 5, 2009 4. 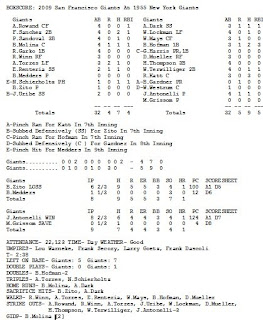 Answer to yesterday's trivia question: Ty Cobb was the only HOFer to hit a home run before the age of 20 and after the age of 40.
.
Posted by Matt Runyon at 4:04 PM