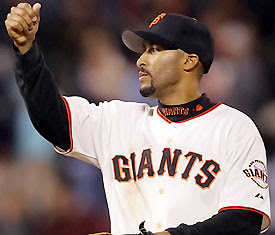 Top of 1st: Randy Winn singled and Pablo Sandoval singled him to third. Benji Molina singled to score Winn and Sandoval scored on a throwing error by LF Whitey Lockman. 1955 0, 2009 2.

Top of 4th: Reliever Paul Geil entered the game and walked Travis Ishikawa and Aaron Rowand. After Juan Uribe flied out and Matt Cain bunted the runners to 2nd and 3rd Randy Winn singled to score both runners. 1955 0, 2009 6.

Matt Cain pitched a complete game and earned the win. Sal Maglie took the loss. The 1955 club has a commanding 3 games to 0 lead. 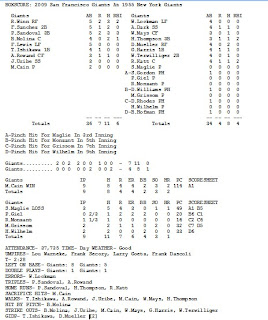 Trivia question (from the game): Who is the only Hall of Famer to homer before his 20th birthday and after his 40th birthday?
Posted by Matt Runyon at 3:35 PM