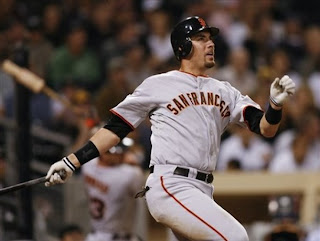 The pitchers for game 2 are Barry Zito for the 2009 Giants vs. Juan Marichal for the 1967 Giants.

Bottom of 2nd: Jim Hart and Ollie Brown both singled to put runners on 1st and 2nd. Dick Dietz lined out to Pablo Sandoval, who then threw to second to double off Hart. Freddie Sanchez threw to first before Brown could get back to the bag and the triple play was completed. 2009 2, 1967 0.

Top of 4th: Ishikawa singled. Rowand hit a double to left to put runners on second and third with nobody out. Marichal was able to set down Uribe, Zito, and Randy Winn to end the threat. 2009 2, 1967 0.

Bottom of 9th: Willie McCovey led off the inning with an INSIDE THE PARK home run. The ball hit the fence at an odd angle and Willie was able to get around the bases. Brian Wilson came on to relieve and Willie Mays greeted him with a double to left center. Wilson was able to set down the next three batters to preserve the win for Zito. Marichal was the losing pitcher. The teams go to Pac Bell park with the 2009 Giants leading 2 games to 0. 2009 2, 1967 1. 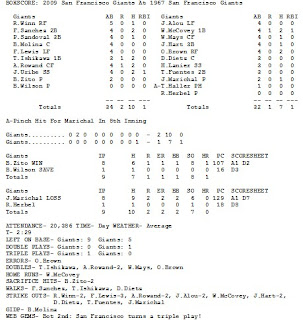