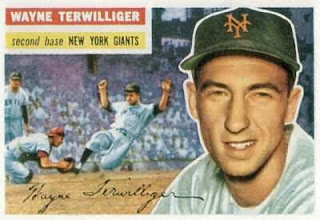 Bottom of 6th: Mays doubled to left and was thrown out trying to score on a Thompson single. Harris singled to send Thompson to third. Wayne Terwilliger hit a double, scoring both runners. 1955 5, 2009 1.

Top of 7th: Benji Molina was hit by a pitch, went to second on a wild pitch, and scored on Aaron Rowand's double to deep left. Juan Uribe singled to center, but reliever Hoyt Wilhelm ended the threat by getting pinch hitter Ryan Garko to ground out. 1955 5, 2009 2.

Top of 8th: Paul Geil got hammered again. He walked Randy Winn and allowed a double to Freddie Sanchez. After Sandoval was walked intentionally Molina singled to score Winn. Pinch hitter Andres Torres grounded out and Sanchez scored. Don Liddle came in and was able to get through the inning without further damage. 1955 6, 2009 4.

Jim Hearn earned the win, Brad Penny took the loss, and Marv Grissom got the save. The series goes back to San Francisco with the 2009 team leading three games to two. 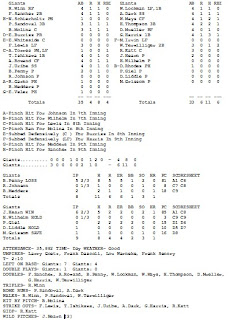